I’ve recently been working on an experimental assembler written in uLisp that generates and runs ARM Thumb code from within uLisp on an ATSAMD21 M0 board or similar.

The project is currently a work in progress, but I thought it would be interesting to describe where I’ve got to, and I’d be interested to hear suggestions for extensions or improvements.

The assembler uses a special version of uLisp to which I’ve added two functions:

The assemble function takes a series of 16-bit integer arguments comprising the machine code of the routine being assembled. These are written into RAM. Any argument can also return nil, in which case it is ignored.

The call function will then call the assembler routine in RAM, and return the result.

The actual instruction generation is handled by an assembler written in Lisp. This makes it easy to check the generated code, and extend the assembler to handle additional instructions and addressing modes.

The assembler is written using Lisp functions, and where possible the syntax is very similar to standard ARM assembler syntax.

For example, here’s a simple routine to calculate the Greatest Common Divisor:

Would anyone be interested in a similar thing for the ESP32, to allow you to assemble Xtensa LX6 code on an ESP32 version of uLisp?

This looks really cool !
Reminds me of my assembler period.
What I’m interested in is , if it is possible to read/write to the sfr’s of the arm chip. ?

Yes, anything you can run in ARM machine code should be possible. Try it and let me know how you get on!

Hi David ,
I will do some tests in the weekend , I don’t have much time now.
I was a bit confused about your writing on the website , about mentioning thumb code.
I’ve recalled a few things. It is like this : cortex m0/m0+ are using thumb instructions , with addition of 6 32bit thumb-2 instructions. The cortex m3 and m4 can use the full thumb-2 instruction set , but also the thumb set.
I have a nice sheet from a book that shows it nicely. I’ve uploaded it here.
Anyway I will do some testing , as this interests me a lot. I believe it’s a great addition to ulisp for arm !
I will keep you informed about my testing. 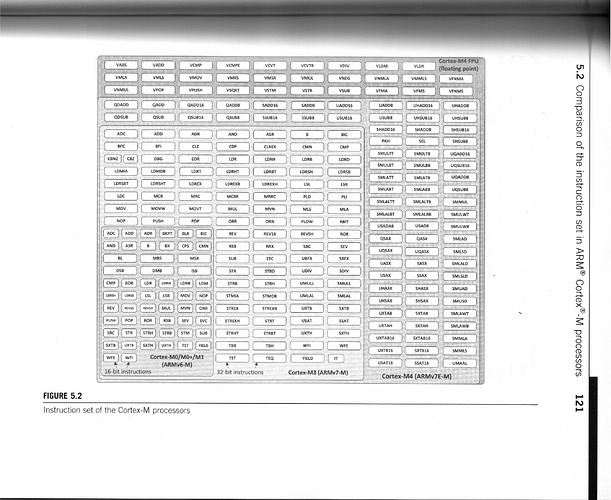 I’ve followed the disassembled code generated by the ARM GCC compiler for the Adafruit ItsyBitsy M0 and Adafruit Metro M4, in conjunction with the table of 16-bit Thumb instruction set encodings in the Appendix B2 document I linked to in the footnote of the page ARM Assembler in Lisp.

Today I’ve uploaded an improved version of the ARM assembler written in uLisp:

I’ve also added some additional examples to the original article:

No offence meant at all in my former post. I was just a bit confused about thumb vs thumb2.
I see you have an improved version , I will ‘test’ it asap.
Thanks very much !

No offence taken! I’m new to assembler programming on the ARM, so would welcome guidance.

I already re-installed my crossworks for arm assembler so that I can check code generated by lisp.
You can check it at rowley.co.uk. I believe you can test drive the software free for a month.
It’s a C and assembler and runs on windows , linux and mac !
They also have some manuals on their site.
I have a personal license for some years now.
I have some good ebooks about arm assembler , If you like I can email them to you.

Great! I look forward to hearing how you get on. Yes, I’d be interested to see the ebooks, thanks.

ARM Version 3.1 of uLisp now incorporates the finished version of my assembler written in uLisp, which allows you to generate and run ARM Thumb code functions alongside Lisp: ARM assembler overview.

It uses a special defcode form, and an assembler written in uLisp.

For example, here’s a simple routine to calculate the Greatest Common Divisor:

I’m new here, and have only just started trying to understand how uLisp is implemented, but I have a question: Doesn’t ARM use a highly standardised calling convention?

If that’s the case, it shouldn’t be out of the realm of possibility to extend this to being able to code a function with any kind of argument by treating assembly functions like C functions. At a glance it doesn’t look like anything in the implementation prevents that.

I’m wondering about this because that ability would make this a more or less direct equivalent to the early Lisp Assembly Program, or lap, facility. It could open the door to something like the compile function of Common Lisp.

Yes, although there are many problems still to be solved, the ARM assembler in uLisp is a first step towards adding a compile function to uLisp.

Excellent. I guess that means I’m going to get my hands on an ARM board. :)