The aim of this article is to show that it’s easy to write a simple arcade-style game in uLisp. The game I’ve chosen is the classic computer game Snake in which you control a snake that glides around on the screen: 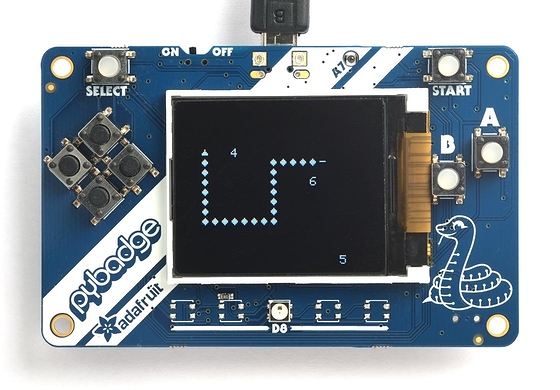 From time to time items of food appear on the screen, and you can eat these by bumping into them, to grow the length of your snake. The aim of the game is to grow your snake as large as possible without colliding with your body.

I hope this game might inspire someone to learn Lisp, or to design their own game using this as a starting point for something more ambitious.

The game is implemented on the Adafruit PyBadge LC, which is a low-cost microcontroller board based on the ATSAMD51 with GameBoy-style control buttons, and a 1.8" 160x128 colour TFT display. The game will also work on the similar Adafruit PyBadge and PyGamer.

The game is based on the uLisp Graphics extensions, and some of the routines I’d already developed for interfacing to the Adafruit PyGamer and PyBadge. Download the ARM version of uLisp from Download uLisp, and include the graphics extensions before installing it by enabling the option:

I’ve intentionally kept the game as basic as possible to make it as easy as possible to understand. My original aim was to have the entire game listing fit on one side of an A4 sheet of paper, and I’ve just about achieved that.

The main limitations are:

In this implementation of the game the display is divided into a grid of 20 x 16 cells, each of which is 8x8 pixels, and each segment of the snake is drawn in a cell. To implement the game we need to keep track of the coordinates of the head and tail of the snake, so we can move them each time the snake moves. Although the whole snake will appear to glide along, we don’t actually need to move the body; we just add a body segment to the front and remove a body segment from the tail each time it moves.

We also need to keep track of the coordinates of the snake’s body so we can test whether the head has collided with one of the body segments. There are two possible ways to do this. One is to keep a list of the coordinates of the snake’s body segments, and check them each time the head moves. The other is to record the position of each body segment by storing a specific number in a 20 x 16 array to indicate its position on the grid. I chose the second approach as I felt it would be more efficient, since we only have to make one check to see if a collision has occurred.

The position of each object on the 20 x 16 grid is given by its coordinates, represented as a list of two integers.

The function move returns the coordinates of a move in each of the four possible directions, N, E, S, or W, represented as an integer from 1 to 4:

The results are taken mod 20 and 16 respectively, to make the grid wrap round at the edges.

The function sprite plots an object on the display. The segments of the snake and items of food are represented on the display by plotting a character char at the appropriate grid coordinates given by coord. In addition, it stores the value cell in the appropriate element of the grid array:

The functions headsprite and tailsprite give the characters used to plot the head and tail of the snake in the four possible orientations:

An alternative option is to use graphics characters for the head and body from the built-in character set: see Graphics extensions - Character set:

The following routine reads the PyBadge buttons and returns a value indicating which buttons are pressed:

Each bit in the result corresponds to one of the eight possible buttons:

The PyBadge LC includes an audio amplifier connected to analogue output A0, which corresponds to Arduino pin 14. By default the board includes a mini-speaker, but you can optionally disconnect this and fit a better quality speaker to the output of the amplifier.

To make sounds you first need to enable the amplifier with:

The parameter fy is a function of y that determines the type of sound. The following options give a low buzz, a rising tone, and a beep respectively:

The function drop-food looks for an empty cell on a random position on the grid, plots a digit from 1 to 9 there, and makes the drop sound:

Finally, the function game-over prints the text “GAME OVER” in large characters in the centre of the screen:

Here’s the main program loop. First it enables sound, and clears the screen:

Then it initialises the grid array, and creates the initial snake consisting of a head facing west, two body segments, and a tail:

The coordinates of the head and tail of the snake are given by headxy and tailxy, and direction specifies the direction it’s moving.

The main game loop then runs approximately ten times a second to test for collisions, move the snake, drop food, and read the keys.

First it sets hxy to the coordinates that the head is about to move to, and newhead gives the contents of that cell. If the contents of the cell is greater than 10 it’s food. If it’s anything else non-zero then we’ve crashed, and so return from the loop:

Then we move the head in the current direction:

If grow is zero we also move the tail. Otherwise we leave it where it is, which has the effect of growing the snake:

On average one in 100 times around the loop we drop food at a random empty position:

The loop ends with a 100 millisecond delay to give the correct timing. Reduce this to speed up the snake.

After a collision the game waits for two seconds, and then displays GAME OVER:

To run the game after loading the source, execute:

The following version is designed to work with the Adafruit PyGamer’s joystick: PyGamer Snake Game.

Still struggle with Python badge. I wonder whether one can plug in a keyboard for the pybadge (or gamer) so I can do something instead using (for say a 6502 code and assembler like those in easy6502.js but use ulisp instead).

What aspect are you struggling with? The simplest way is to use the Arduino IDE Serial Monitor as a terminal, and type the Lisp program in from that.

After development when I unplug the Arduino, can I actually use the program as a program and use a keyboard like the lisp badge. I guess I can always use the joystick for game. But to type something or say interactive (not as a program editor) key in a few character here and there, any way?

To be more specific, can I use a bluetooth keyboard on that so I can have a poor man lisp badget (without soldering your know) that can key in … If it is asking for too much I can do a bit work just no soldering

Have a look at the two links I gave in this post:

Good suggestion. You might be interested in these uLisp-based computers that are similar to this idea; for example, see @Kaef’s Lisp Machine: and his VGA version: