I recently needed to log some data from uLisp running on an Arduino, and I was reluctant to have to go to the effort of connecting up an SD-Card interface. I then remembered that I had a 24LC256 I2C memory chip which could be connected up with two wires plus power, and would be easy to interface with uLisp, even on an Arduino Uno: 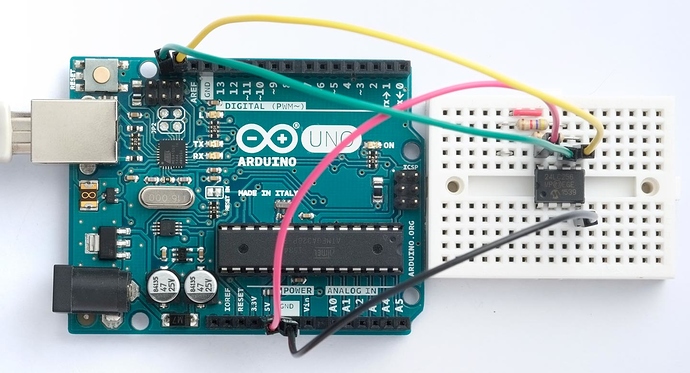 Here are the details:

The 24LC256 works with a 2.5 V to 5.5 V supply, and it provides 32 Kbytes of non-volatile storage. It’s also available for around £1. Unlike SPI flash memory chips, you don’t have to worry about erasing the memory before writing; that’s all handled automatically. The only consideration is that it’s more efficient to write 64 contiguous bytes at a time, but you are free to write single bytes if you want to.

The chip has a default I2C address of #x50, but there are three address lines which gives you a choice of 8 different addresses.

Because writing can take a significant amount of time, after writing to the chip you need to wait until the device is available on the bus again.

Here’s a test routine that writes the numbers 0 to 255 to the memory chip, and then reads them back:

I’ll add this application note to the uLisp Sensor Library in due course.