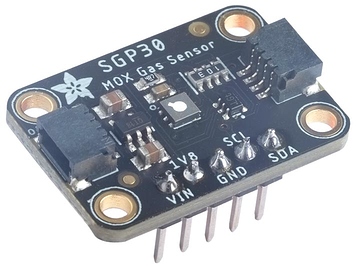 The SGP30 routines use two utility functions. The function readbytes reads a specified number of bytes from the stream s and returns them as a list:

The function crc8 performs a CRC checksum on a list of bytes and returns the CRC:

The SGP30 provides a self-test function that runs an on-chip self-test:

The function returns t if the test succeeds.

To start the air quality measurement you need to call the initialisation function:

For the first 15s after the sgp30-init command the sensor is in an initialization phase during which an sgp30-measure command will return fixed values of 400 ppm eCO2 and 0 ppb TVOC.

To measure the air quality give the sgp30-measure command:

This returns a list of two values: the eCO2 in ppm and the TVOC in ppb. For example:

If you breathe on the sensor you will see both values increase.

After the sgp30-init command, an sgp30-measure command should be sent in regular intervals of 1s to ensure proper operation of the dynamic baseline compensation algorithm. This is implemented by the function sgp30-run, which prints out a pair of measurements every second:

Alternatively you could plot these values to provide a graphical display of air quality.